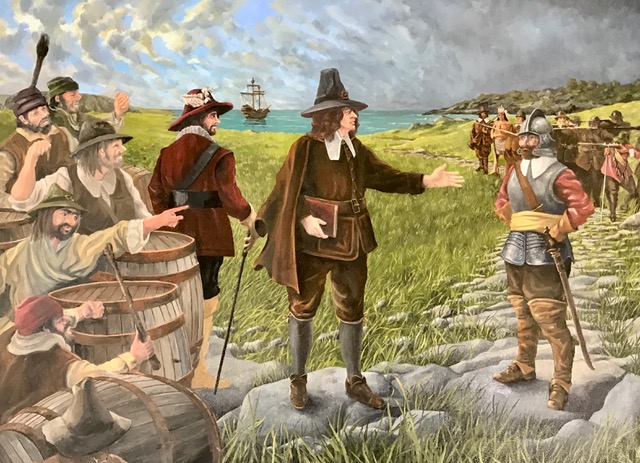 A work in progress - Roger Conant the Peacemaker: How John Washington's painting of the 1625 scene at Fishermen's Field, Cape Ann, was looking by 3 September

Local history is often better told in pictures than in words. A visual impact is more engaging, and artistic licence means that a controversial slant can be introduced – which is always good for enjoyable and balanced discussion.

There are very few paintings inspired by Budleigh’s history, and yet our area is crowded with fascinating events and people who would make good subjects.  Sir John Everett Millais’ 1870 painting ‘The Boyhood of Raleigh’ was surely the first and the best known.

Then a century or so later we have Peter Goodhall’s 1983 depiction of smuggler Jack Rattenbury’s escape from the excise officer Captain Stocker – now in Fairlynch Museum. That painting was followed by the more recent one of the German Heinkel bomber strafing Budleigh High Street during WW2

And now local artist John Washington is working on a painting based on events even further back in history, but relevant to this year’s 400th anniversary of the arrival of the Plymouth Pilgrims in America, and the Mayflower 400 celebrations. 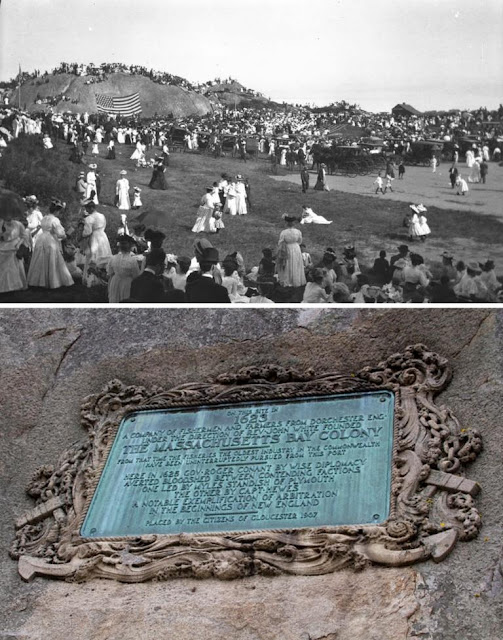 Dedication of the Tablet Rock plaque in 1907 at Fisherman’s Field, with, below the inscription: ‘Here in 1625 Gov. Roger Conant by wise diplomacy averted bloodshed between contending factions one led by Myles Standish of Plymouth the other by Capt Hewes. A notable example of arbitration in the beginnings of New England. Placed by the Citizens of Gloucester 1907’. Photo credit: Cape Ann Museum, Gloucester MA, and  Mary Ellen Lepionka

His subject is the peace-making role of East Budleigh-born Roger Conant in the 1625 confrontation between West Country fishermen and the Plymouth Pilgrims’ military adviser Captain Miles Standish. The event took place in Fishermen’s Field at Cape Ann, near the present-day city of Gloucester in Massachusetts. 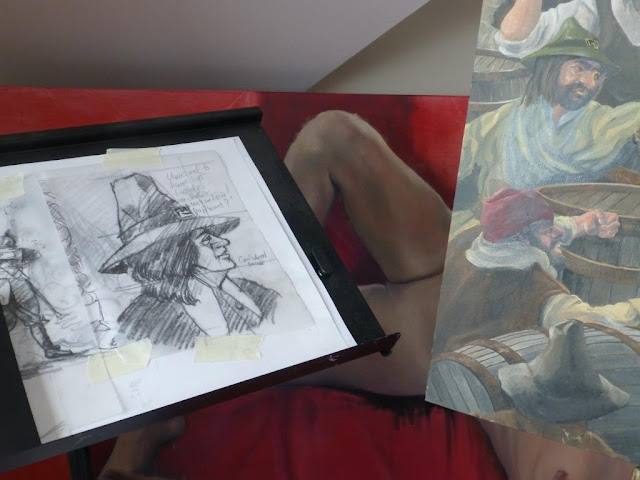 Since the first sketches back in May this year good progress has been made. Originally, the concept was a simple representation of Roger Conant himself, but over time John has found himself excited by the historical background and by the interaction between the characters of the 1625 story.

Giving the central figure a sufficiently authoritative but friendly pose faced with the notoriously fiery Miles Standish - known by his enemies as Captain Shrimp because of his small stature – has been a challenge. ‘The content of the painting has developed significantly from what I initially thought would be a quite straightforward portrait, he says. 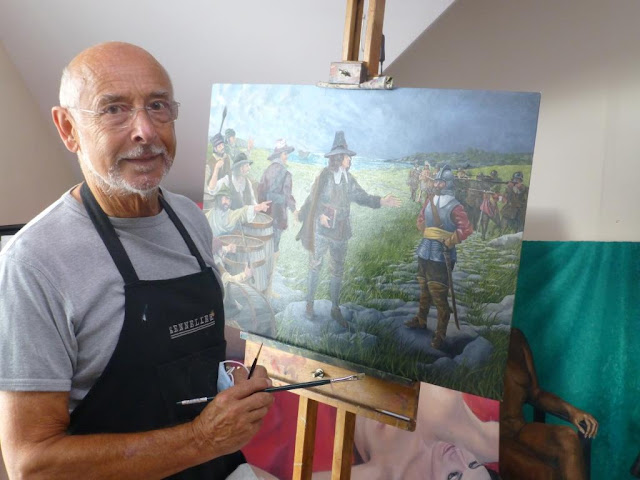 Accuracy of historical detail has been to the forefront of John’s thinking and he is pleased with the reception that the painting has had from experts in the USA, notably from Gloucester historian Mary Ellen Lepionka who has offered her congratulations on the depiction of the stand-off on Fishermen’s Field – ‘nice job’ was her comment.

Recently, John has worked mostly on the background - the sky, the sea, the grass and rocky path. Conant’s clothes have also received more attention. ‘I shall be working my way through the various images in the same way over the next few weeks,’ he says. ‘The fishermen are looking a bit light in colour but as I overpaint them, they’ll tone down and the painting will gel much better.’

You can access other posts on this blog by going to the Blog Archive (under the ‘About Me’ section), and clicking on the appropriate heading.

Michael Downes
Born in 1946, in Birmingham UK, of Scottish-Irish parentage, and brought up as a Roman Catholic. Early education may have driven me into teaching, in the belief that schools should offer a more enjoyable experience for children. Studied French at London University, specialising in 16th century literature. Then came 34 years of teaching French, along with red herrings and common sense, at Oundle School. Dabbles, and some people say meddles, in many areas. A passionate gardener, moved to Devon partly to grow ericaceous plants more easily. Other interests include family, cycling and walking. Published articles in Etudes Rabelaisiennes, (a long time ago), and some books - 'Oundle's War' (1995) - 'The Scientist in The Cottage' (2013) - a biography of Henry Carter FRS (1813-95), 'Our Little Clown' (2016) - a biography of Reg Varney - photography, reading, music, studying butterflies, chopping wood, DIY, playing on the scaffold tower, and networking for the Greater Good. Married to Anthea for over 50 years. Three children: Emily, Simeon and Rosanna, six grandchildren and two Bengal cats. I'm a cancer survivor – I hope!